Newport Beach delays updates that could increase hundreds of fees

Newport Beach is holding off on updating its user fees.
The City Council on Tuesday was to consider a refreshed fee menu that would result in 275 levies going up and 73 being reduced. No reason was given for the issue being postponed, though the city is devoting significant resources to responding to the COVID-19 coronavirus crisis.
The council will revisit the subject in May.
Newport regularly studies its wide-ranging fee menu on a rotating basis. This year, officials studied community development, fire and police service fees.
Proposed highlights include increased fees for ambulance trips and a new $760 fee to streamline preliminary applications for residential development.
Overall, finance staff has recommended increasing 275 fees, reducing 73, adding two, deleting 13 and leaving 48 unchanged.
If all recommended fees are eventually approved, they would become effective July 1 and, accounting for phase-ins, could generate about $580,000 in additional annual revenue.

The council Tuesday unanimously approved spending about a half-million dollars to design and obtain regulatory permits for its planned “trash wheel” garbage-collection vessel for Upper Newport Bay.
With no discussion, the council approved a $465,000 contract for Burns & McDonnell Engineering Co., a nationwide firm with offices in Brea and Los Angeles. The city also will budget $60,000 for additional technical studies, if needed.
The project is funded by a grant from the California Ocean Protection Council and state funds set aside for environmental restoration of Upper Newport Bay. It will require approvals from the California Coastal Commission, California Department of Fish and Wildlife, Regional Water Quality Board and Army Corps of Engineers.
The planned solar- and hydraulic-powered water wheel is to be placed at the top of Upper Newport Bay by the Jamboree Road bridge. It is intended to capture garbage flowing down San Diego Creek from inland Orange County before it can hit Newport Harbor and the Pacific Ocean.
From its stationary position, the wheel will funnel debris into an onboard holding bin that will be emptied periodically. The device is expected to prevent up to 80% of the floatable debris that enters the bay from getting past the jetty and hitting the open ocean.
Like its cousins in Baltimore — the first city in the United States to use a water wheel — Newport’s vessel will look like a snail with a paddle wheel, or maybe a conch shell crossed with a steamboat. Newport is expected to have the first trash wheel on the West Coast.
Newport’s wheel faces a special engineering challenge, city staff says. The loaded bin cannot be towed from San Diego Creek to the unloading ramp at Newport Dunes because of a concrete breakwater obstructing the creek’s mouth.
To get around that, the bin will sit on a short, elevated rail system in the creek and will be pulled by winch onto land when full. A garbage truck will dump the contents of the 8-cubic-yard bin into the truck.
Construction is expected to begin in 2021. 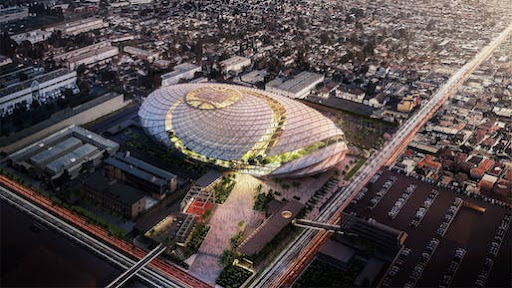